In the summer of 2021, Envoy reached out to us about a major renovation project underway at a top-rated Children’s hospital in Los Angeles, CA. The renovations would include many bright spaces with 3D characters and interactive environments to engage patients and their families.

From the moment our team was brought on, Envoy had an amazing plan in place. They would create four areas inside the hospital that would feature large displays with imaginative and interactive environments. Each location would help create a more welcoming and playful experience for the young patients and their caregivers. These four areas would be:

This display would feature a Rube Goldberg-style machine that makes different foods and packs them into a backpack. As the first display, it hints at the different characters and worlds seen elsewhere in the hospital. This display would come in at about twenty feet in length and close to eight feet tall.

At the charting stations, a parade of our characters would be walking across the large screen, each with a unique personality. These displays would be a little over thirteen feet in length.

The playroom would be an area where kids can add digital stickers to an animated environment that responds to interaction. This display came in around five and a half feet in length.

Stylistically, the team at Envoy had some incredible sketched-out concepts that we’d turn into a complex 3D animation.

All objects, characters, and environments would be created in a way that made them feel like they could be vinyl toys that came to life with the help of some magic.

From a technical perspective, we had the challenge of working with VERY large resolutions. We also had to animate at 60 frames per second to achieve the right amount of smoothness. We knew immediately that we’d have to keep render times down to a manageable number to make sure we weren’t taking 14 weeks just to render!

We first started out with building seven characters, but after a very positive response, seven MORE characters were requested to join the original line-up. All the characters would be used in the interactive displays as well as in marketing material for the hospital. There were now a total of 14 characters, each with their own name:

Each of these characters was built with specific polygon limits in mind to be able to work in a real-time game engine. Once approved, we rigged each character to be able to move. Think of it as putting bones in a puppet; we had to define the rules for movement before we could animate. 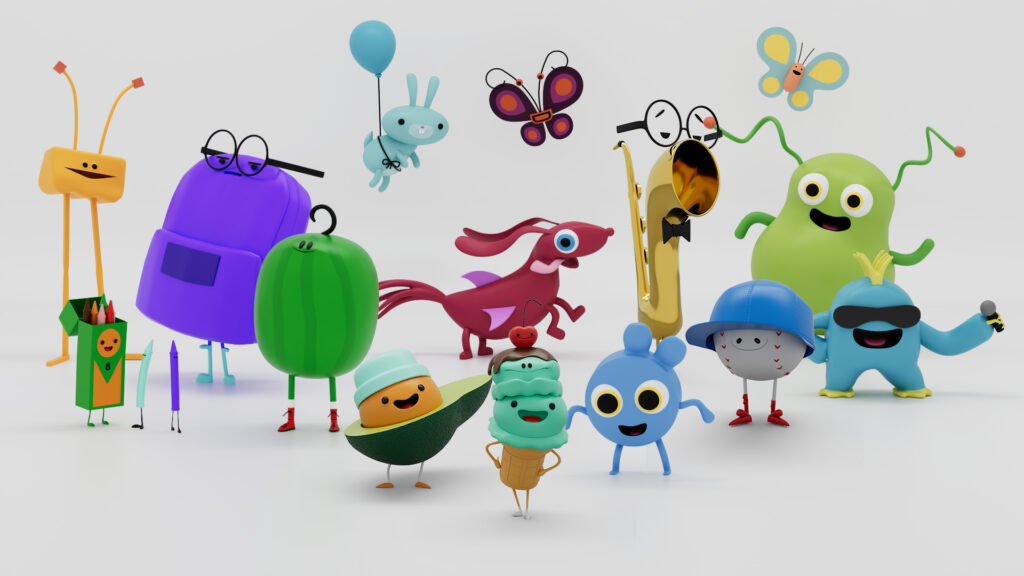 Once our characters were ready, our team gave each one a unique walk based on their personality traits, ranging from eager and excited to bored and uninterested. The characters were then made into digital stickers. The stickers would allow patients to drag and drop their favorite characters into playroom scenes.

While developing our characters, we also had the four playroom scenes and the entry lounge to create.

Our playroom scenes were:

Starting with the undersea scene, we took a sketch and built the entire 3d environment with looping bubble animations, and even a little pinching crab.

In the Wonderland scene, we’d create a fun scene with magical motions that are out of this world.

Speaking of out-of-this-world, our team also built a fun outer-space environment with a moving rover and a hovering UFO!

Next came the most challenging portion of this project! We’d create a machine with looping animations of different items being built and thrown into a bag. A math solution even Einstein would be proud of to get ALL the animations lining up perfectly!

Finally, we created about ten different interaction animations that would be triggered when certain parts of the screens were touched. For instance, this robot arm would snatch a donut if somebody touched the general area of the arm;

This project was a monumental assignment in creativity and speed. A challenge that our team took with open arms!

Overall, our team built, rigged, and animated fourteen characters, four environments, and one of the most complex 3D machines, and then rendered out about 30,000 frames at resolutions 4k and higher — In less than 16 weeks.