Car insurance is a highly competitive field when it comes to marketing. Companies like Geico spend billions of dollars to stay top of mind with their potential customers. Root, like most companies, didn’t have billions of dollars to spend. They do however have something Geico doesn’t have, an individualized product that truly saves their customers money by removing the things people shouldn’t have to pay extra for —including marketing budgets, agents and bad drivers.

The goal of this project was very simple, to drive more awareness of Root’s offerings. One of the things we say often is that each piece of content used for a company should have only one goal. You can’t introduce your product or service and sell to people in the same sentence. For this campaign, Root was aiming simply at gaining awareness and getting people to click through for more information.

To gain more awareness of their brand, Root would run a series of online ads to reach their audience using an animation we’d create for them. Their target audience for this campaign? 21-35 year old’s that spend some time on YouTube. YouTube ads can be incredibly challenging because you only have a few seconds to get people to pay attention and get your message across before they click away.

With each video you use for your business, you should only try to accomplish one thing. In this case it was to introduce their brand to people. However, if people stick around to watch the remainder of the video, we wanted to get them to the next step of the sales funnel.

The one big thing we know about ads on YouTube is that more often than not, people are going to click away after the 5 seconds “skip” button reveals itself. Take a look at most ads on YouTube and you’ll notice that even YOU click away from ads before you even know what the company or product is. Our solution to this problem became a sort of reversal in the video presentation. Many commercials you see show the logo really big at the end of the video. We decided to show the logo really big on the very first scene and then go into the story.

A big part of this campaign was to test content to see what gave the best results. We decided to create 3 different versions of the each spot so we can actually test which works best. When using paid ads online, it’s often incredibly easy to test different versions of the same ad to see which works best. So, the story needed to work in 3 formats, 7 seconds, 15 seconds and 30 seconds. This became quite a challenge because we needed to make sure the story/scripts were written in a way that could be complete in a long form as well as shortened into smaller edits. 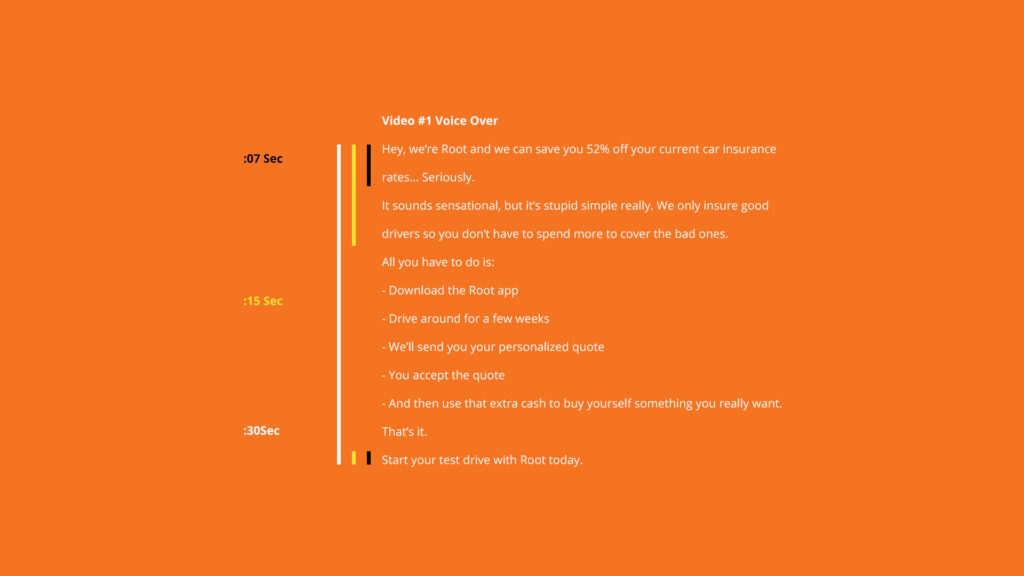 To deliver these messages quickly to their audience we knew we had to be simple with what we said to be remembered, one might even say, “stupid simple”.

The idea of “stupid simple”, was one of the key ideas for not only the story, but for the art direction as well. When thinking about simple ways to tell stories or create, “basic shapes” came up, but we wanted to create something more visually interesting to get people’s attention right away. So, we went even further and discovered the blocks that kids play with and thought that was perfect for the story we wanted to tell.

As of 9/30/2019, The 6 videos we created for Root have been one of their top performers for getting clicks to their landing pages. The videos have been viewed more than 6 million times as part of their paid advertising campaign.